A week in Prague

“I work remotely” is something that I’ve gotten used to saying since I joined HappyPorch exactly a year ago. I dislike that phrase. I dislike it because it conjures images of beach life and digital nomadism, and that’s really not the case. Not for me anyway. The HappyPorch team are indeed distributed across the world; from the UK to Australia, Brazil, and a few places in-between. We also don’t have an office. So, if you put those two facts together it’s easy to see the romanticism of it all.

In reality though, it’s not quite as glorious as it may seem. I’m going to ignore the challenges of remote working, but you can read more about the challenges we face in some of our other posts.

When the team do meet up and work together “remotely”, it can be incredibly intense. Since I joined a year ago, we’ve had two team meetups. The first was in Morocco in November 2017 and the second in Edinburgh in April 2018. Both times we lived together in shared accommodation, had important early morning meetings, worked even harder than normal and more collaboratively than we would do in a usual working week. After the week (or two) would finish, we’d say our goodbyes and classic “see you on Zoom on Monday” remark as we went back to our base locations. These “official” meetups are always highly productive experiences but constrained to only twice per year.

In July, Barry sent a message saying that he was in Czech Republic for a week and was planning to meet with Ondrej while he was there. It was an open invitation to anyone who wanted to join for the week. I love visiting new places (I’d also never been to Prague) and also liked the idea of working with Barry and Ondrej in person and having real face-to-face meetings and conversations instead of the usual Slack messages and pre-planned Zoom calls. I booked my flights and eagerly accepted the invitation.

All three of us arrived on Sunday at different times and we met at the AirBnB flat that we’d pre-booked. The flat was amazing. We each had our own separate rooms, there was a huge kitchen and even a jacuzzi instead of a bath. Unfortunately, I didn’t get time to sample the jacuzzi! On Sunday night we chatted and caught up around the kitchen dining table; Ondrej’s soon to be a dad, Barry had just returned from a paragliding and I have a trip to Cambodia and Vietnam planned in a few weeks. One of the great things about co-working spaces is that they tend to promote the social aspect that is sometimes lost when working remotely. Locus was no different. On Wednesday evening, they had their monthly “hump day” night out. This involved a trip to a local pub (the pub was in the middle of a park and the weather was still warm so we sat outside) for food, drinks and good chat with other coworkers. The highlight of that evening was learning how to make an origami frog chatting to so many interesting people from different backgrounds and hearing their stories about why they were in Prague. 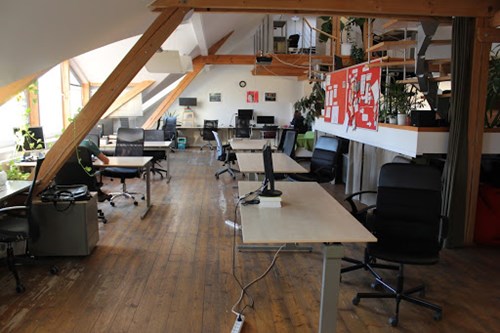 On the infrequent occasions that a few of us meet up, we always want to make the most of our time together. During the week in Prague, we had a few big picture planning and reflection discussions which meant lots of early morning and dinner time meetings. I always find that these discussions, when we’re all in the same room and not a virtual room, are so much more fruitful. One of the discussions we had was a retrospective on one of our current projects. We talked about the things that were good, things that went wrong and what we could have done better. We then came up with a plan for the next few months based on our learnings from the retrospective. I’m not sure we could have had the same discussion on a call. 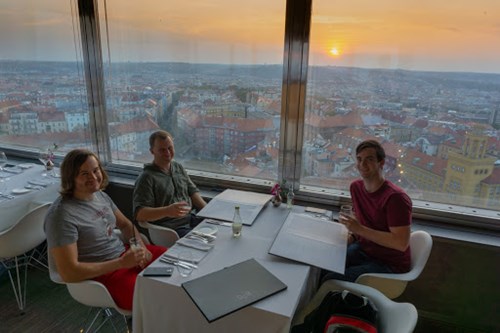 Work hard, play hard – that’s how the saying goes, right? I’m going to create my own version: “work hard, culture hard”. I knew very little about Prague and the country before visiting so I was keen to learn about its history and culture while I was there. Luckily, Ondrej is Czech and provided a great tour guide experience. Czech cuisine was something that I was incredibly ignorant to before the trip. I had no idea that there were so many dishes unique to the country. I don’t think there was a meal where I ordered my own food. Ondrej was always keen to restrict my options to typical Czech dishes and most of the time they were dishes that I probably wouldn’t have ordered (or understood how to order) so I’m grateful that he did that. Dishes that were on the menu were Guláš, svíčková and Smelly Cheese (Olomoucké tvarůžky). (I advise you not to try the cheese. I think that was Ondrej punishing us for complaining about the lack of vegetables in their food and for eating sugar for breakfast).

Ondrej left us on Friday afternoon and I spent Saturday being a tourist around Prague. I walked for 15 hours, 23km (thanks FitBit) and learned a great deal about the history of the city. I joined two walking tours –  one of the city and one of the castle. The architecture of the city is amazing and the fight that the Czech’s have shown in their past to be where they are today – a free, prosperous country full of amazing people and great culture is inspiring. 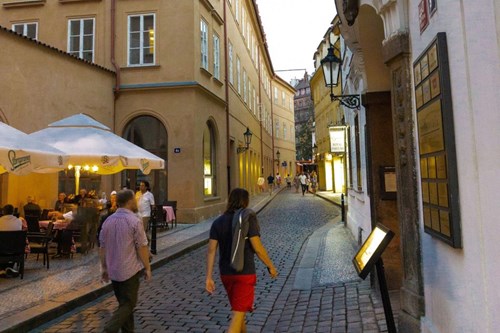 I learned some interesting facts while wandering around on the tours:

To finish an amazing week, I met up with Barry and we took a Pedalo boat out onto the river just as the sun was going down. We got to see the amazing scenery one last time. Wow. 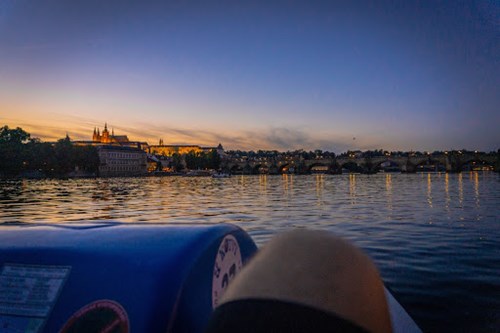 Working remotely has its downsides but for all the challenges it brings, experiences like this make it completely worthwhile. Roll on the next one in Porto! (TBC…)

Mark is a modern day puzzle master, relishing the chance to find the most efficient solution to a new challenge each day. When he says the best part of his job is project retrospectives, it's because he loves seeing what clients can do once their problem is solved.

Away from his digital command central, you'll find him teaching at his local swim club (and getting a bit of training in himself).